Good Morning,
Having created an album and put a photo in it, saved it and now want add some photos to it. Unfortunately it is not immediately obvious to me how to do this as I can't seem to find a button etc that will let me do this.
_______________
message ref: 4469

I went back to it and now the Add Media button works as I expected, it didn't the first time round, it only offered to create a new album etc not add to an existing one. Should this be reported as a software bug?
_______________
message ref: 4470

Thanks. It's not so much a software bug as a poorly designed user interface. I've noticed that most of the web design these days seems to be geared towards mobile devices, and desktop screens just have to make do.

The problem is that it's not possible to create a new album in the database without first having some content for it. So logically you can't at that stage Add anything to it because there is nothing yet there to be added to. 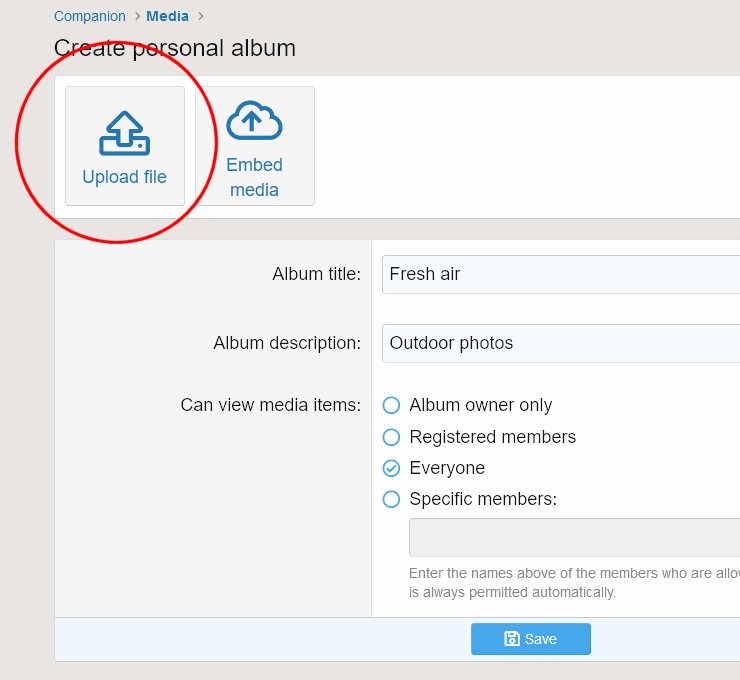 And only then you can click the Save button to create an album containing it. This is the opposite way of doing things to what might seem intuitive -- I will see if I can add a note to that page to make it clear.

which then shows this:

Each of those is an album, as indicated by the not very clear folder icon. Hovering over one of them shows the name of the album, and clicking it selects that album as the destination for the new content.

When adding the second item to an album you see only the first image (as in the first two in the row above) which makes it a bit confusing that you are looking at a list of albums and not individual images.

Stephen Freeman said:
What threw me was that I had already created the album and saved a photo.
Click to expand...

Can you post a screenshot of what you saw or didn't see? i.e. what can you see now that you couldn't see then?

.
I have added an extra button to the posting editor toolbar which should have been there from the start:

Gallery embed makes it easy to insert any image from the Media Gallery into a post. That might be one you previously posted as an attachment, or one you added directly to the gallery, or someone else's attachment if you need to refer to it.

Clicking the button shows a list of images in the gallery. Click the one you want,and then the Continue button at the bottom of the list. There seems to be no scrollbar on the list, but it scrolls with the mouse wheel.

I have also done some housekeeping on the other buttons to tidy them up.