Whilst browsing this thread recently I followed a link to one of Martin's pages (Real Track) in the Templot Companion which I wish I'd found a few months ago.
However, when I got to the last section, Wing and check rail dimensions, which deals with the Templot representation (albeit not quite up-to-date) but I don't think it quite covers the whole story of the prototype. So here's my two pennyworth which I do realise may not have much application to modelling but helps to complete the prototype info.
The following applies to the post-war REA bullhead designs used by the LNER, LMS and SR.

I believe that the final image on the page needs a few changes (shown in red) and some additional notes (below image): 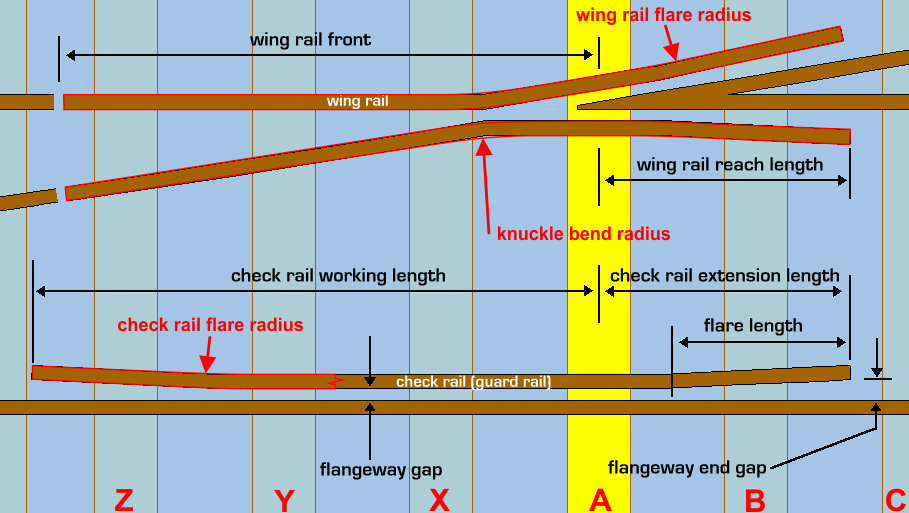 All the rails (with two exceptions) are inclined at 1 in 20 to the vertical (approx 2.98°). Curved inclined rails therefore require the head of the rail to be a different radius to the foot of the rail i.e. a conical curve. This can be achieved by using non-parallel rollers as one would when rolling a conical boiler. The two exceptions are:

Code:
Data taken from LNER Permanent Way Standards 1926 and LMS Permanent Way 1928. I have seen an Eastleigh copy of these REA standards but I haven't yet been able to source a copy. Note that there are differences between the LNER and LMS versions, in particular rail lengths and timber spacings.

S-Club-7 said:
Whilst browsing this topic recently I followed a link to one of Martin's pages (Real Track) in the Templot Companion which I wish I'd found a few months ago.
However, when I got to the last section, Wing and check rail dimensions, which deals with the Templot representation (albeit not quite up-to-date) but I don't think it quite covers the whole story of the prototype. So here's my two pennyworth which I do realise may not have much application to modelling but helps to complete the prototype info.
Click to expand...

That page has been on the web site in one form or another for about 20 years. Which is why the check rail diagram is not up-to-date in showing the knuckle bend radius which Templot has been drawing on the templates for many years now. I must remember to make a new diagram soon. 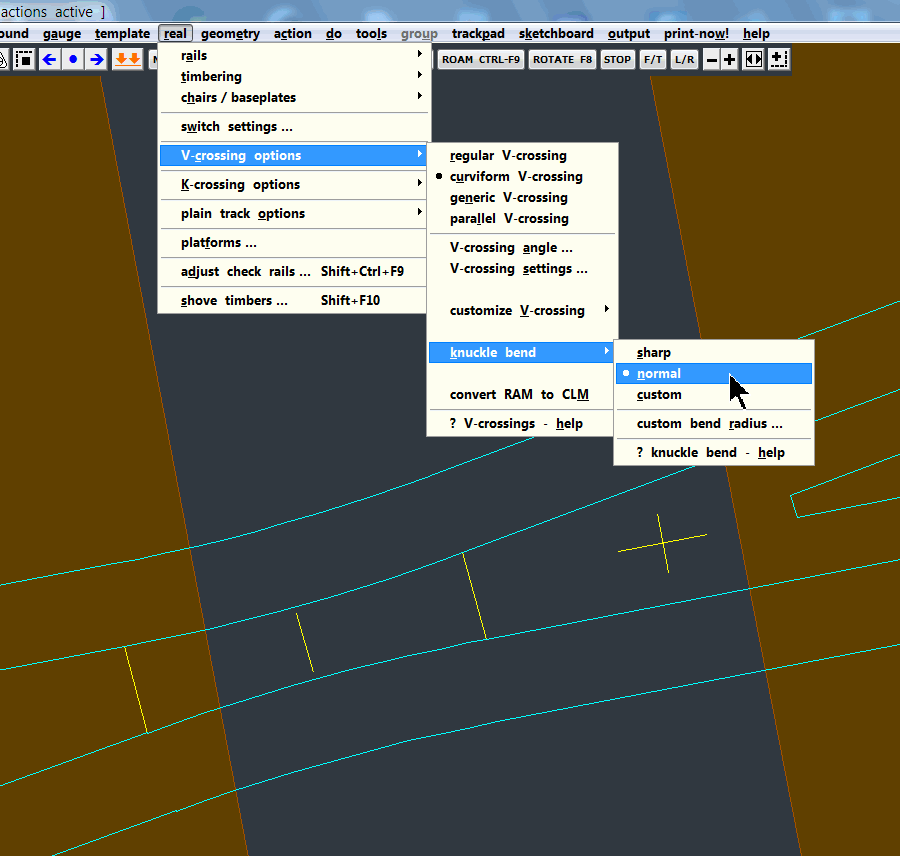 Many thanks for your list of REA knuckle radii which will be very useful for anyone wishing to customize the setting. Those settings tend to be more generous than the GWR settings -- anyone having trouble getting smooth running through crossings could usefully increase the radius from the default.

Regrettably, I still haven't got round to applying a similar bend radius to the K-crossing outer wing rails (stock rails) and K-crossing check rails. Seeing how much still remains to be done in Templot, even after all these years, can be a bit depressing at times. Perhaps those working on the open-source T3 version might like to have a go at it?

As you say, for inclined rail the knuckle bend needs to be a conical bend. The near impossibility of making such a bend in the smaller scales, and similarly of putting the twists in the vee rails while maintaining the running edge straight, is the reason I think using inclined rails in the smaller scales is just plain daft. It causes endless problems including with gauging, and is impossible to see anyway. The one place where it might be noticed would be at the ends of check rails, but they should be vertical of course.

Which means that for the Plug Track project all rails will be vertical throughout, and I'm not open to any argument about that, it's decided. Consequently the Plug Track chairs will not be compatible with inclined chairs from other sources.

Templot can actually draw the 2-D templates with inclined rails, if you change the rail section settings and select the head and foot option (normally intended for flat-bottom rails) and set the foot width to match the head width. The template then looks like this at the knuckle, showing the foot visible beyond the head in plan view, where the rail is not vertical: 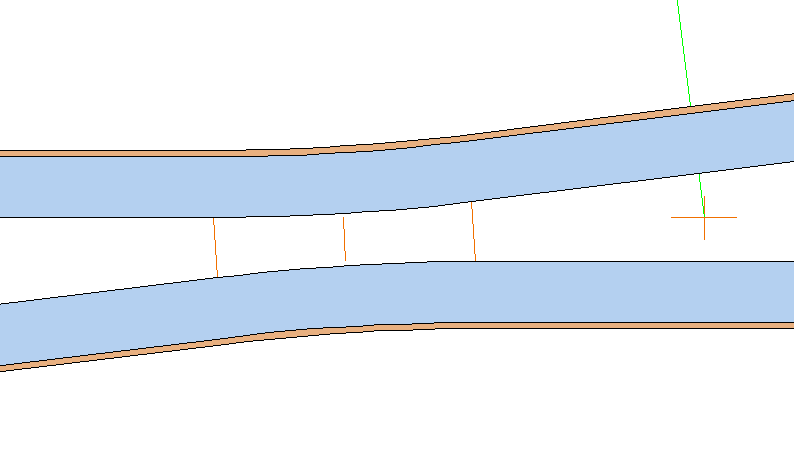 The usefulness of this to anyone actually building track on the template is near zero, and is less than zero if sensibly using vertical rail. I must check whether the inclination is switched off for the check rails, I can't remember about that now (or much else).

For the check rail flares, I wrote a lot about it recently, so I won't repeat it all here, see: 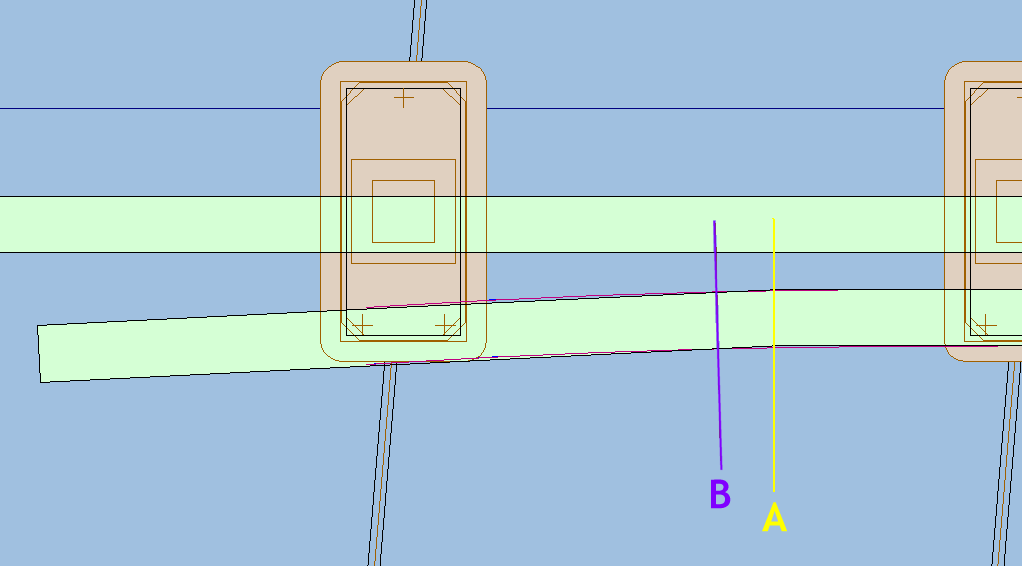 Much the same applies to the wing rail flares, although there are slight prototype differences (related to wing rails being inclined).