What happens with the tie-bar when it's close enough to skew into another track?

I like sketching layouts in Templot - and one thing that comes up quite often is the below: 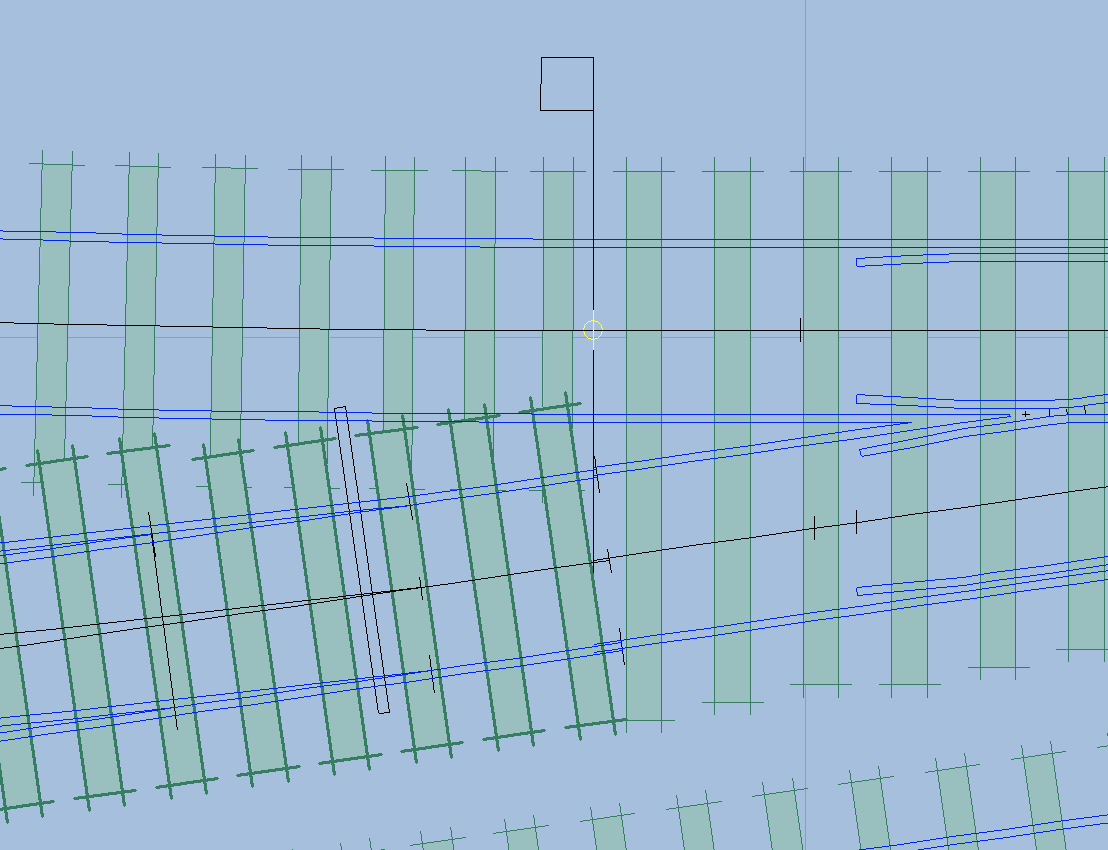 The first few timbers from the vee shown can be replaced with single straight ones, but then the tie bar of the next turnout is there. What's the solution? Skewing the tie-bar? I'm confused!

There is no "right" answer, prototypes vary. Also the location and type of traffic has an important bearing on the timbering layout -- is this in a fast running line, or the gas works sidings?

For a fast running line the timbering layout would be drawn up in the company's p.w. design office. For yards and sidings it would likely be made up on site by the p.w. gang, often making use of serviceable used materials.

A couple of details:

1. the mark in Templot is not a tie-bar. Prototype stretcher bars don't extend beyond the timber ends, and are connected to the drive rodding, which can be at either end (but not both). The mark in Templot is purely a template construction symbol called the "drive slot" to indicate the position of the slot in the baseboard for the point motor linkage. The mark is extended on one side as an aid to identifying the hand of the switch.

2. the special switch chairs must fit the rails in the designed locations, so the switch timbers can't be moved from their design positions. But ordinary chairs can be moved along as needed, provided the rail is supported at not more than about 31" centres. 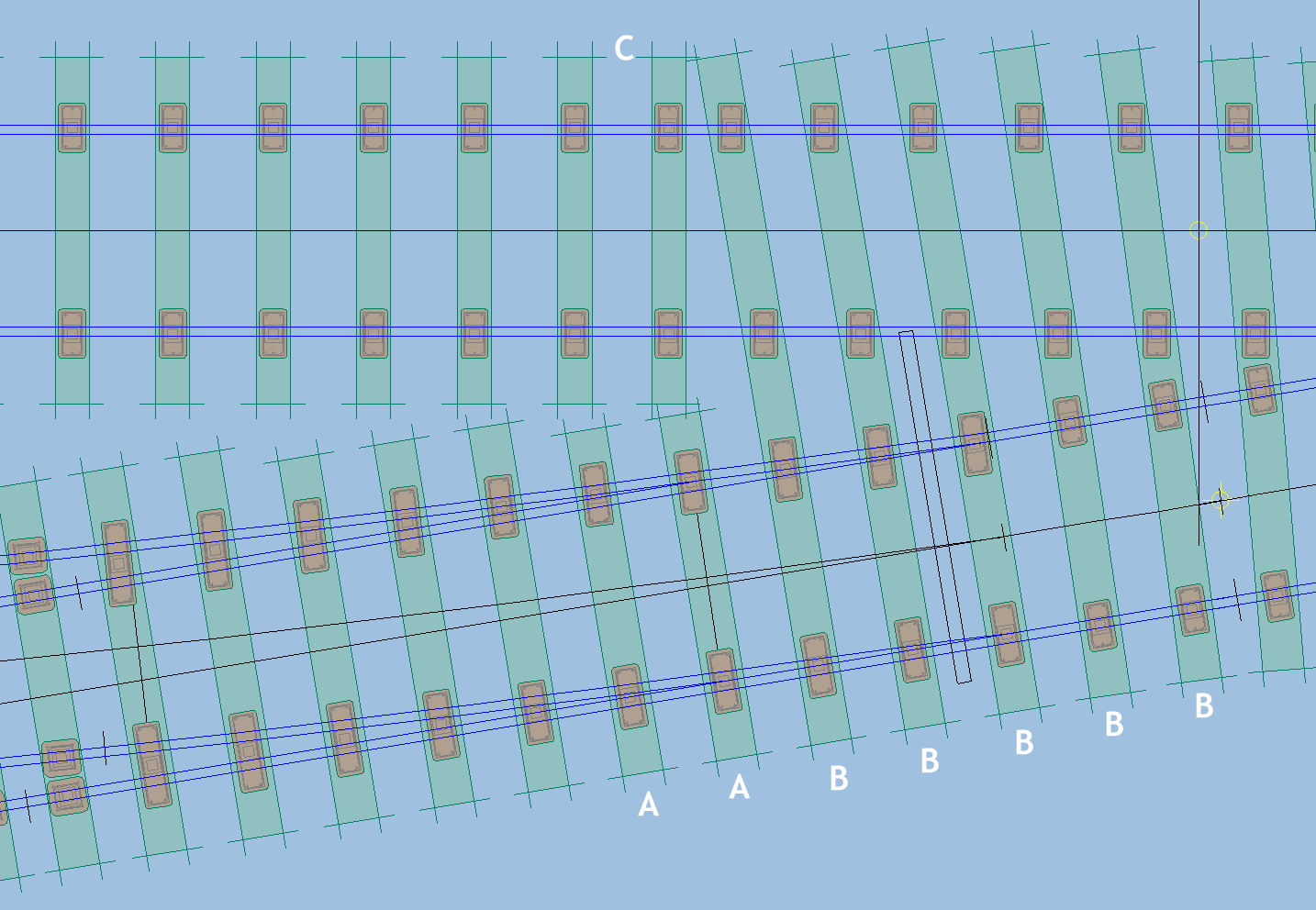 The switch timbers at A have been shortened to clear the conflicting sleepers.

The switch timbers at B have been extended to replace the conflicting sleepers.

The sleepers at C have been shoved along a little for better spacing.

The timbering style in the turnout has been changed to equalized (skewed) because this always makes it easier to adjust timbering layouts.

The above changes are made using the shove timbers functions. This screenshot also shows some of the experimental work I am doing on the chairing for 3D printing.

Thank you Martin - that's very helpful. The layout is your garden variety Minories:

I have amended the angle of the timbers to align to the running lines (i.e. away from the two sidings at the top of the plan) and it looks a good deal better already. I'm aware of timber shoving and will do that when the plan is 100% finalised - I'm basically there, but I know how much work that is!

Is there a simple way to align the timbers on both turnouts of the entry crossover or will that all be manual shifting around the datums of the crossing vees?

La Cathedrale said:
As an aside I did not know that Templot had the option of displaying chairs that's pretty cool. Where is that option located please? I did print the template to see if ti would be on the output but I can only see J1, S1..., T1,.. X1, X2, etc. - I know S1 are standard chairs, but can you tell me where to look for the other chair designations please?
Click to expand...

Those are not chair designations, they are Templot's timber numbering scheme.

As I mentioned, the chairing is still 100% experimental and not yet ready for use, most of the switch and crossing chairs are not yet done. More about all this (18 pages) at:

To see the chairs on the trackpad, click these 2 options:

At present they do not yet appear on the printed templates. As yet they are for exported DXF and STL files for 3D printing and CAD only: 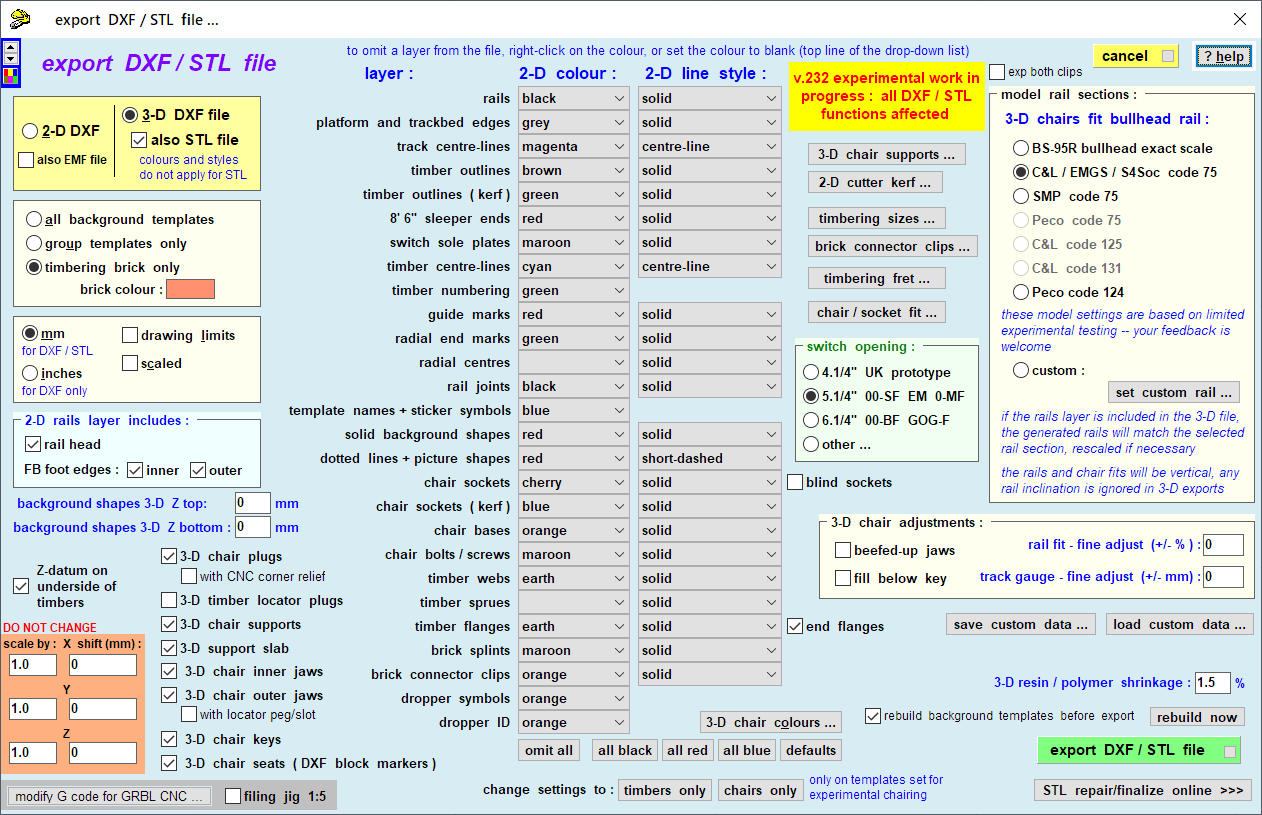 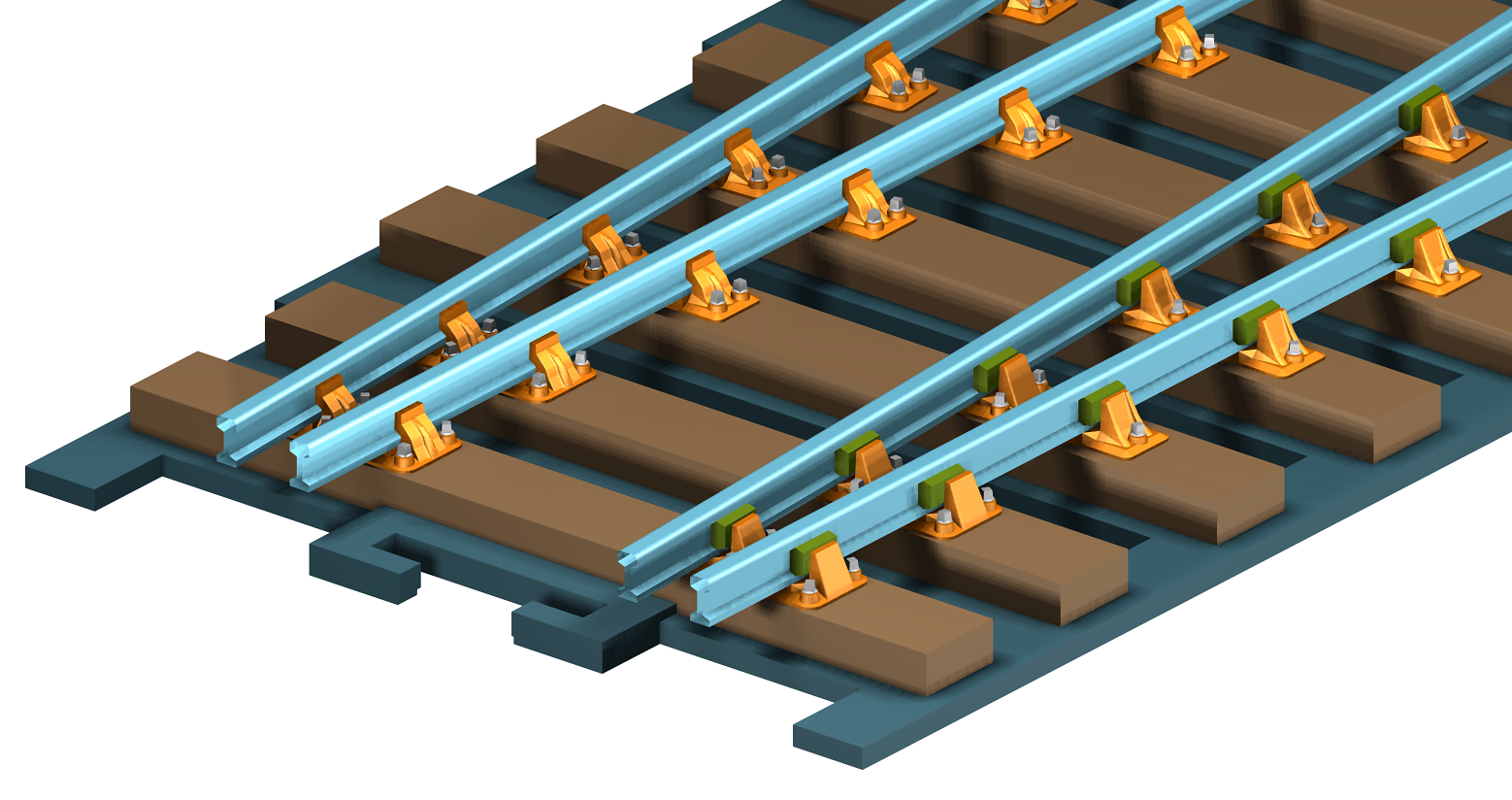 There is still a long way to go, it will take months or even years to do it all. Remember that Templot is my hobby project, it is not a commercial product.

If it's of any interest, there are photos from the NER showing the tips of one turnout on the very next timber following the wing rail timber of the preceding turnout. It was seemingly quite common there for space restricted areas.
_______________
message ref: 3225
You must log in or register to reply here.