5 way switch just for the fun 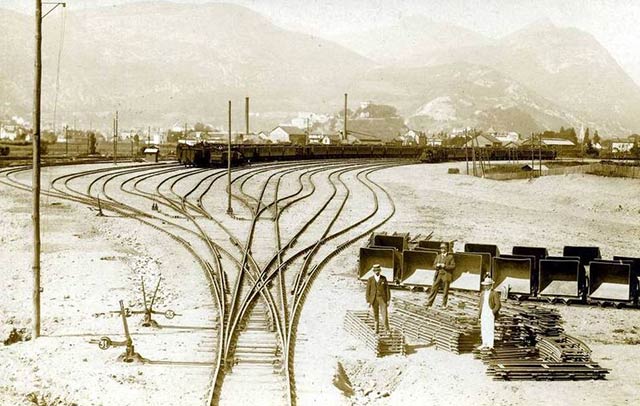 no i dont like it...i love it, can i share this picture with a other forum that i am active on?
Yes it is on my laptop for personal use...
Thank you very much for sharing.

Phil O said:
I think that I can understand where you're coming from in a turnout that is around 8 feet long in old English money. What is the width over the outer most rails at the heel end of the turnout?.
Click to expand...

The heel end? i am sorry i can not do a proper translation (tried even with google)
But i think you mean the end of the turnout?
If not please tell me where to take a measurement(and what the heel is ) 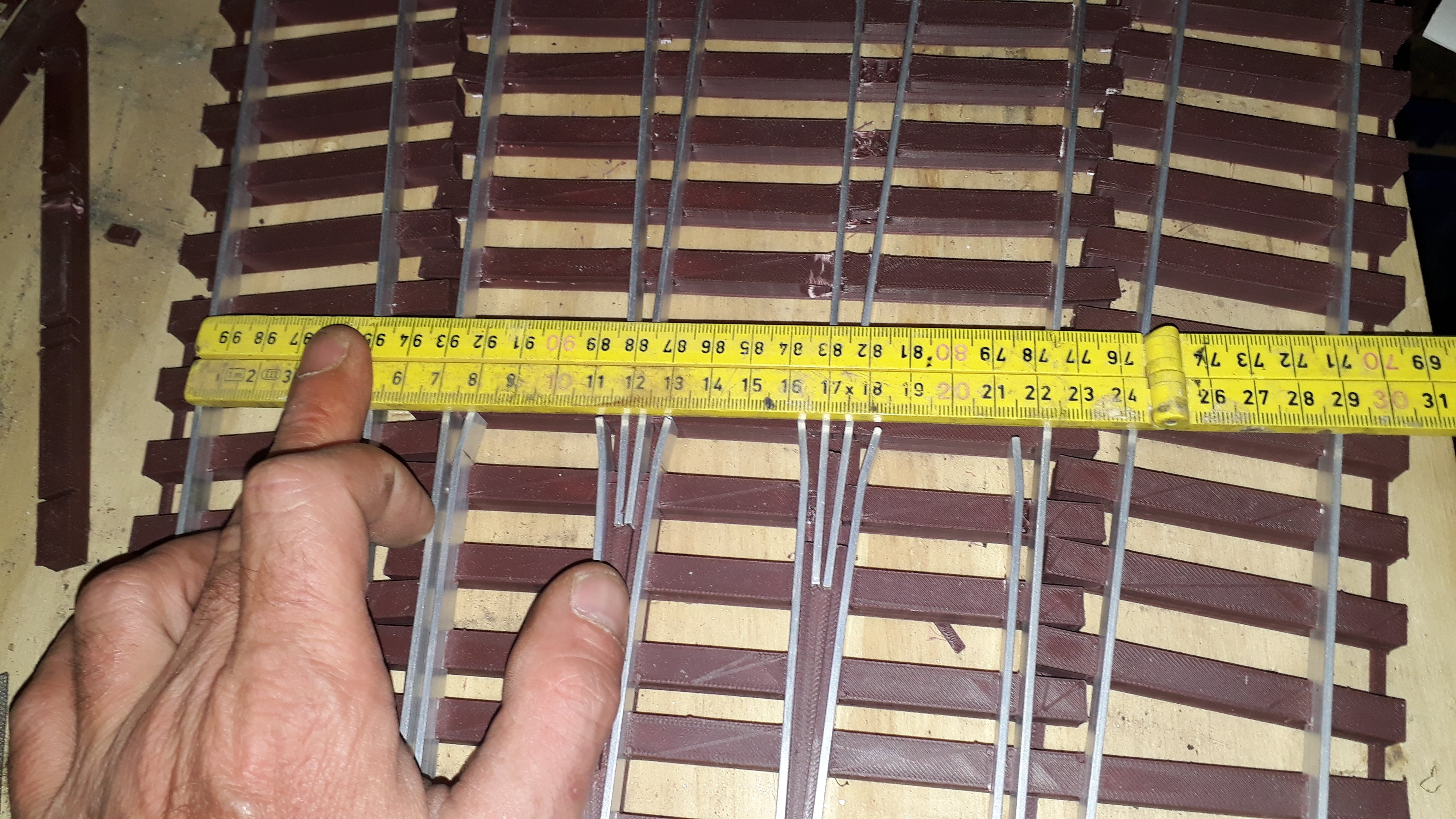 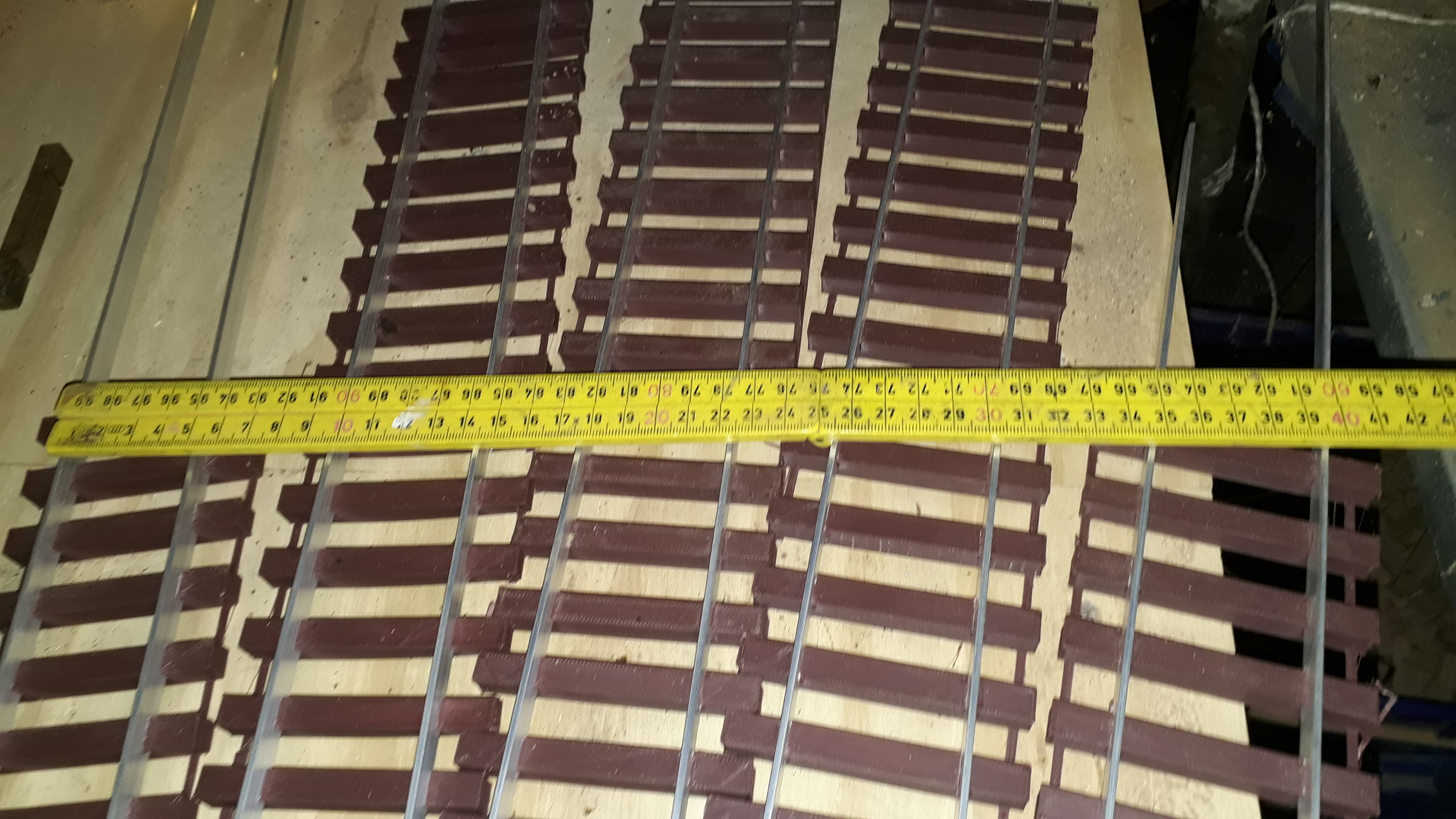 Thanks in advance with best regards, Igor

Matt M. said:
The joining bars between them are referred to as stretcher bars in English.
You can have more than two stretcher bars on long switch rails.
Click to expand... 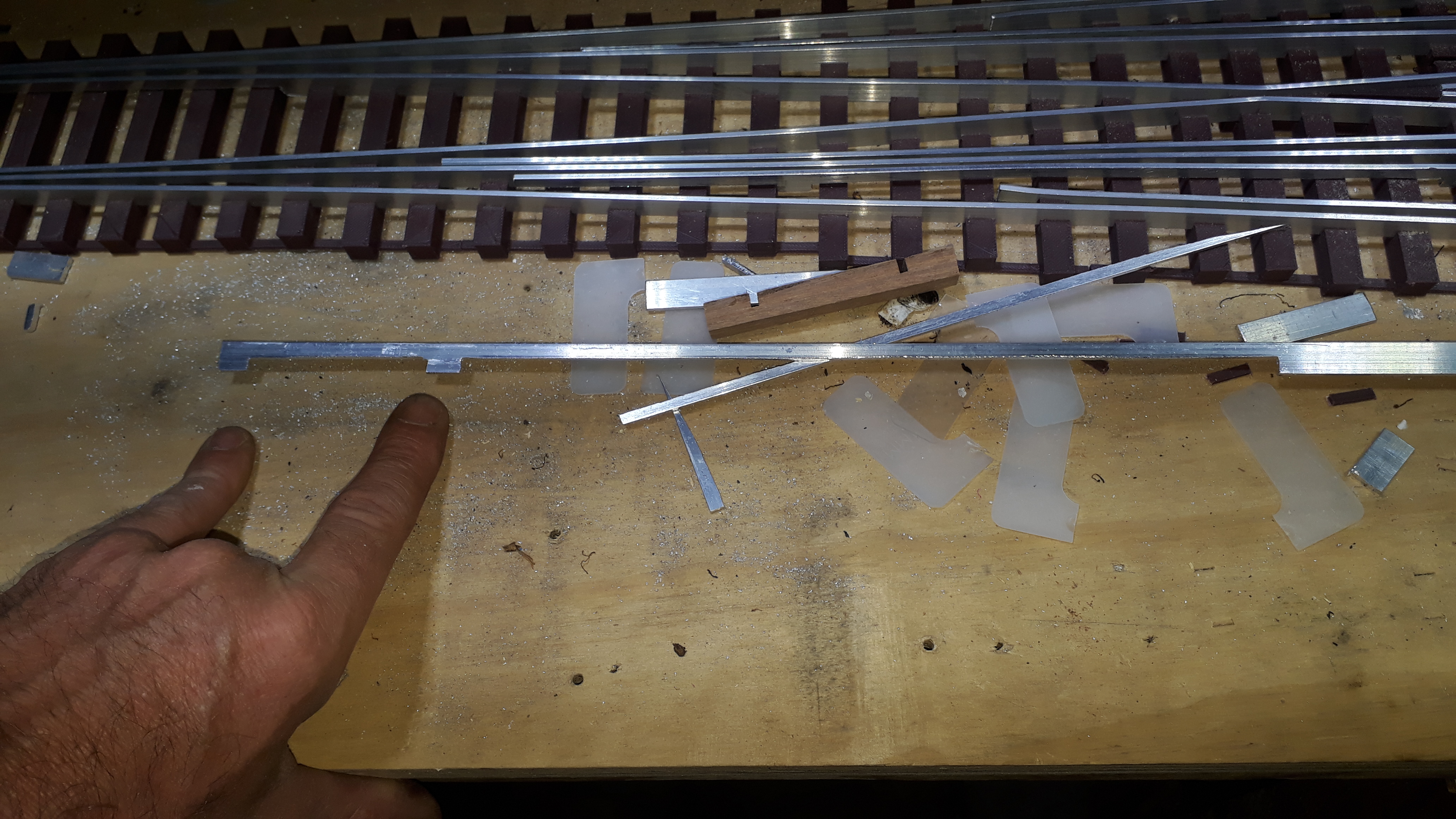 I think you are referring to something i already planed to do?
I could be wrong?
I am planning to make two bars at those two points, one of them is going to be the switch bar(pointing finger)
Yes sorry i still have to sand all the points.

Stretcher bars yes i was referring to switch rails, thanks


Matt M. said:
The other thing used in real life to hold the switch rails to gauge are 'switch stops' and
'gauge pins/stud bolts' or 'gauge/distance blocks'.

I am going to sand them at the other side(instead of the inside), i agree, looks way better and is better for the rolling stock, smother running, i think.


Matt M. said:
Hope this is useful information to help you overcome your lateral and twist movement issues.
Click to expand...

Very helpful and very wanted information for me! thanks again, please keep the info coming
With best regards Igor

roythebus said:
what is the reason for using Ali strip
Click to expand...

If you are standing at 20-25 meters of height on a real station yard, you will see exactly the same in scale, and it is a factor 10 cheaper.
I really admire the people that are taking great lengths to mimic every chair screw nut fish plate ect, but for me that is a bridge to far(??for now!!).
I am planning t give the safety rails some extra support, because you see it from a distance.
You wont see the details at a 2 meters (standing)to 4 (to 6-8) meter distance(watching), just in real life at a 20 meters high scaffolding.
I posted pictures on this forum, you can find them on resources.
https://85a.uk/templot/club/index.php?media/dsc00390-jpg.192/https://85a.uk/templot/club/index.php?media/page-4Was 15 meters in height max btw when the pic's where taking

Matt M. said:
They were eventually supplied with a portable adzing machine which must have been a relief
as some of the timbers used were quite dense and hard to work.
Click to expand...

As a carpenter: yes it is/was a relief, i can imaging that one, there are some woods species, and dont forget the knots/branches in the wood...that will make work on it very difficult
If you can get some piece of iron wood, take your hand saw compare that to a soft wood(what ever hard wood btw), cutting length wise.
You want to know your wood? this is the way, saw it length wise with a hand saw...it will apply for all the woods

Matt M. said:
Cutting the seat to hold the rail in the top of a sleeper, with or without a plate, is
more common than you think.
Click to expand...

That's around 16 inches in our old measurements, that's a big WOW and I think it must be a bit unwieldy moving it around.

I took it from a french forum

Justme Igor said:
no i dont like it...i love it, can i share this picture with a other forum that i am active on?
Yes it is on my laptop for personal use...
Thank you very much for sharing.
Click to expand...

Almost forgot my update....
Still needs a lot of work..need to sand my points and need to get the switch bars done. 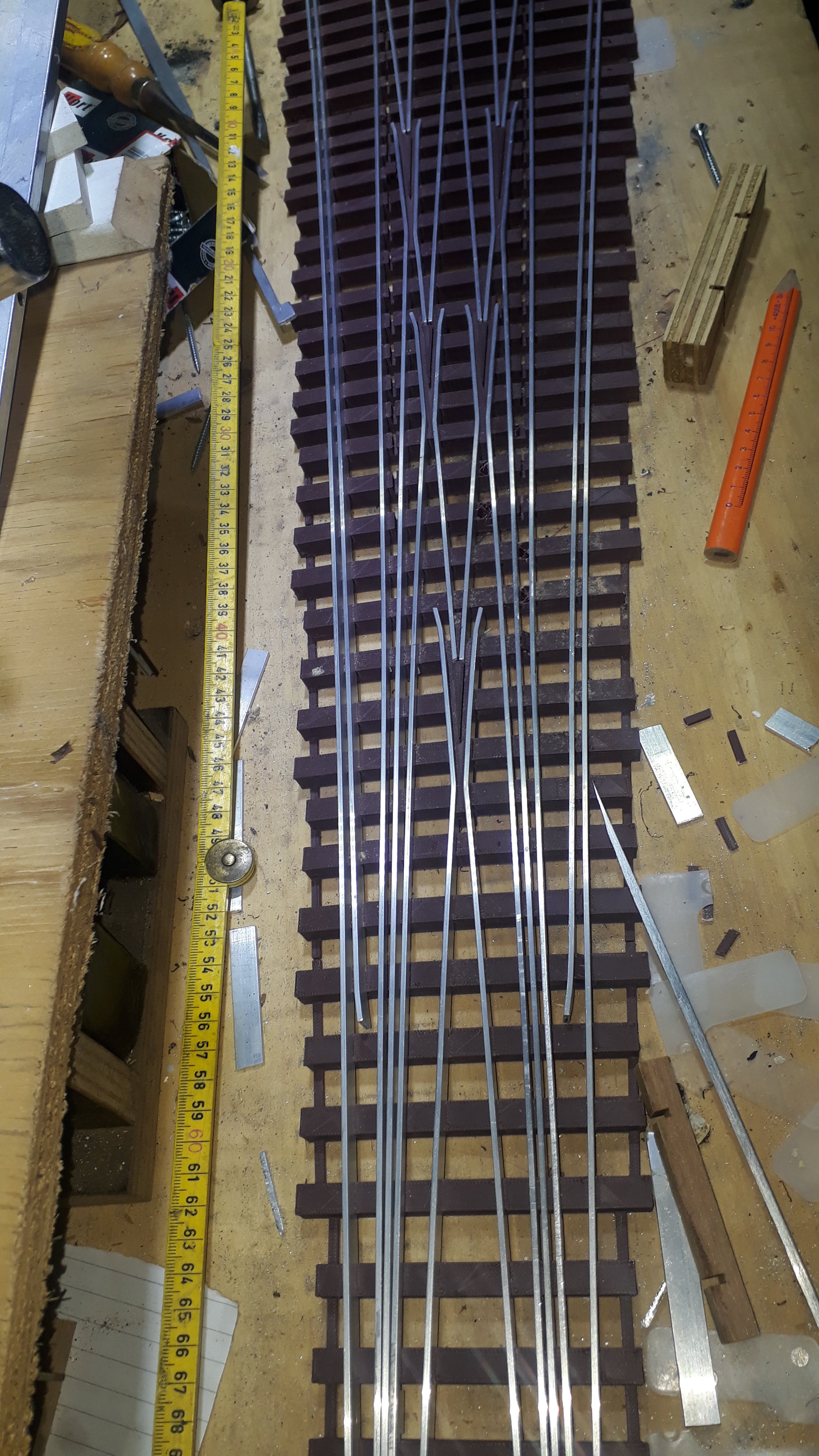 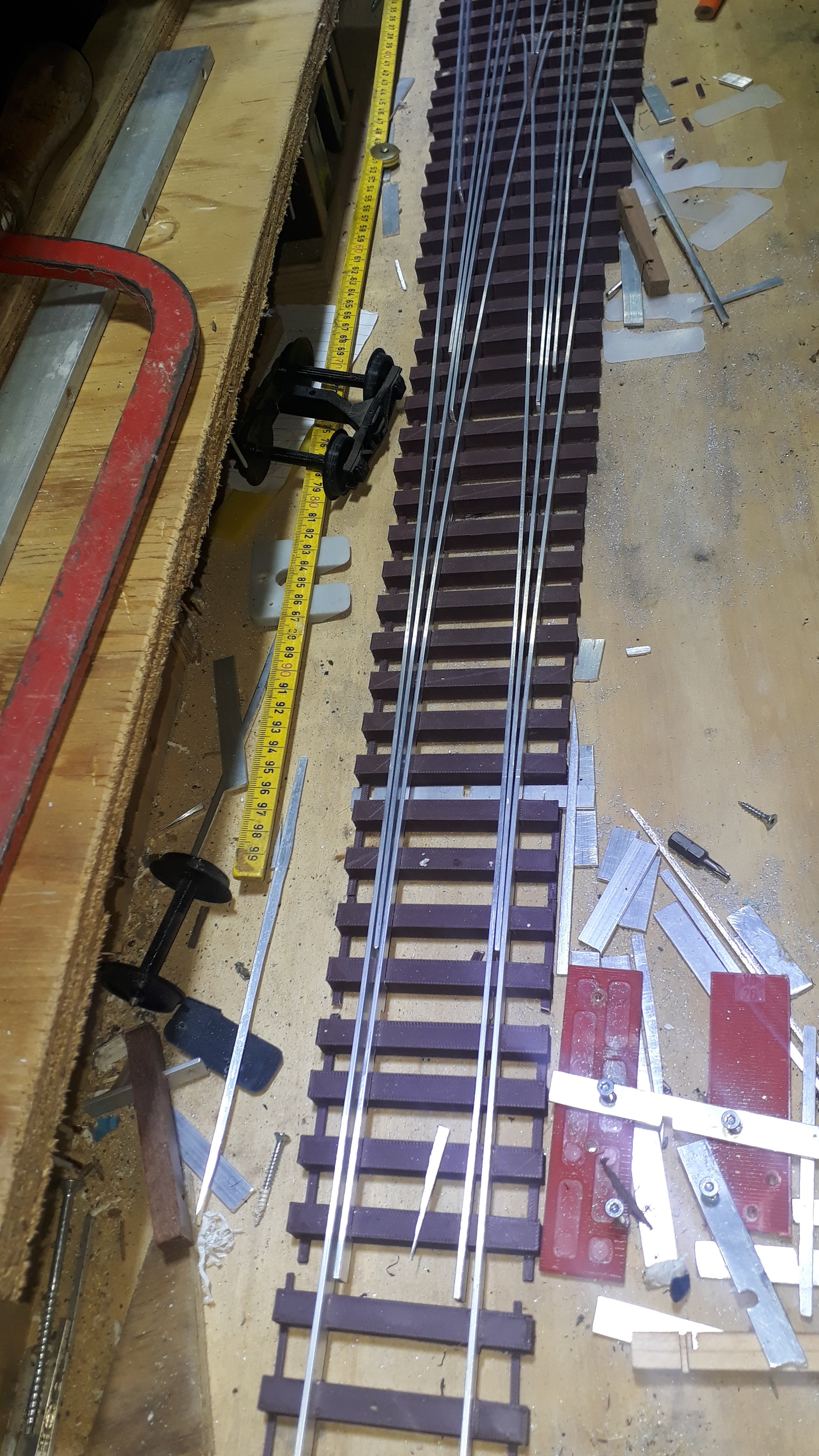 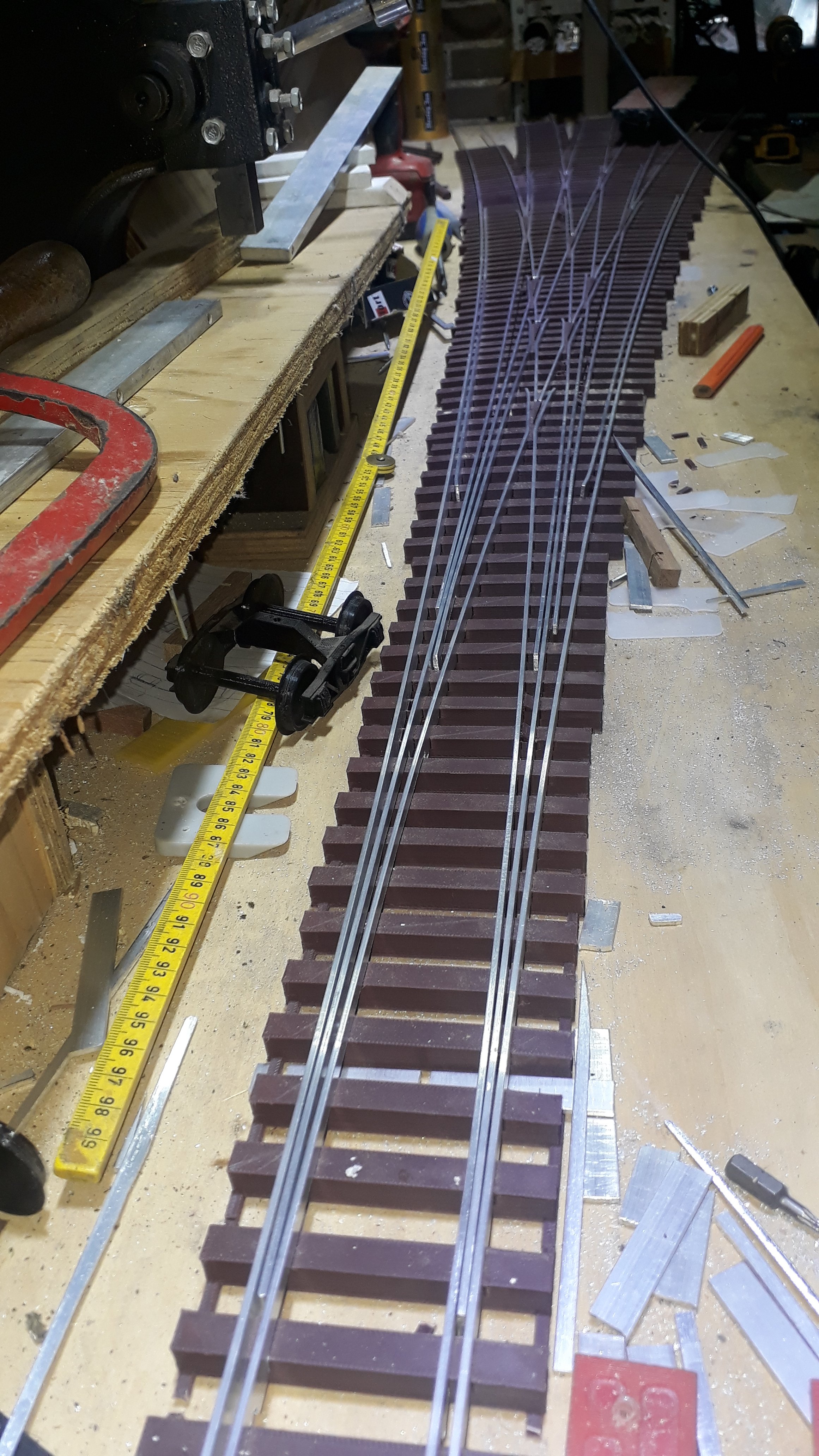 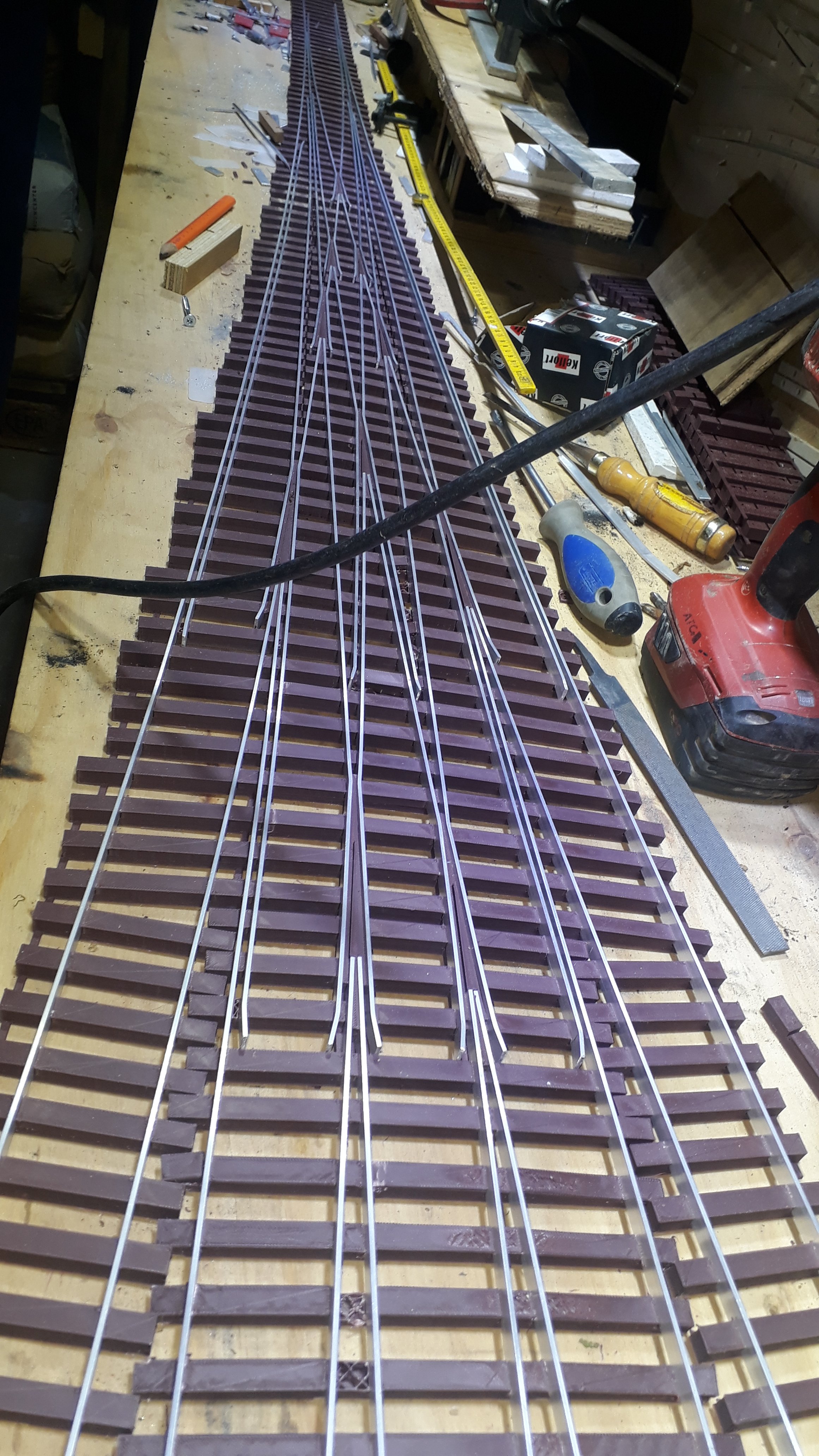 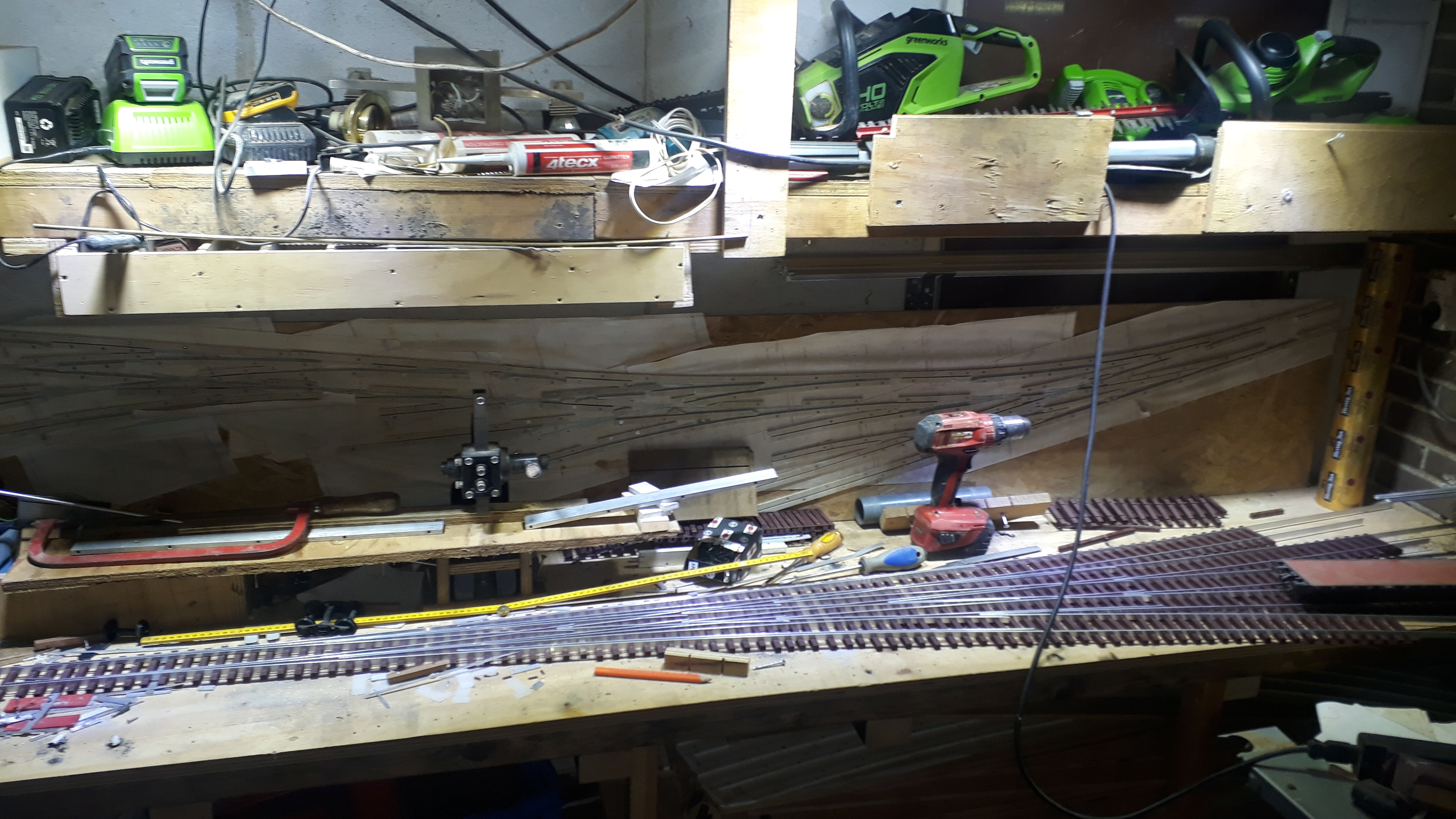 Just to start off.
This is a Victorian State Railways formation. Late 1940s I think. 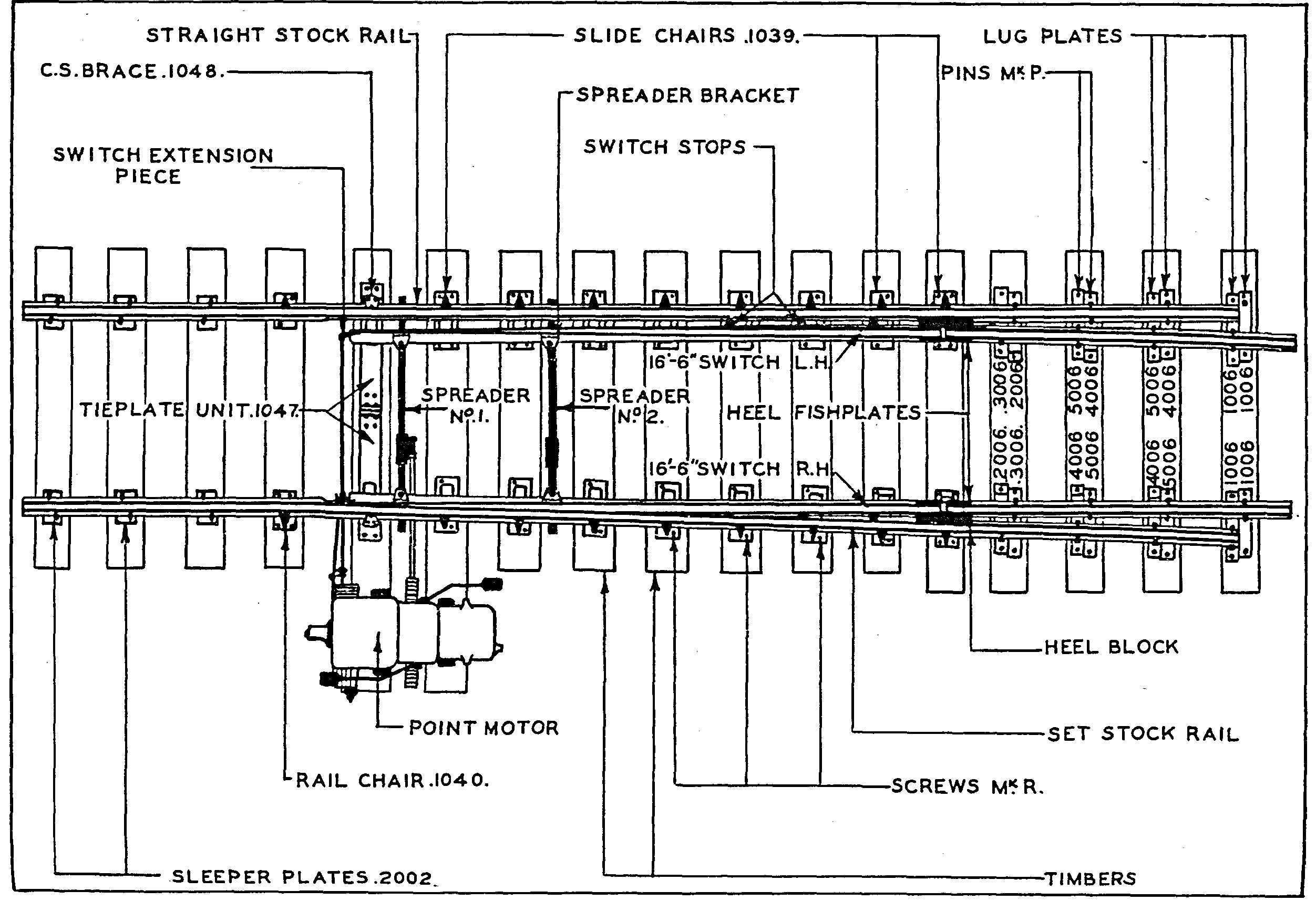 Note the spreader bracket has a part that goes under the stock rail to inhibit lift in the switch rails.
This is more often seen in bars made from flat stock. I haven't seen any done that way with round bars.

Later stretcher bars have the flat rotated to a horizontal plane and a slot that catches a lug from the tie plate.
These are referred to as 'Slotted' stretcher bars. These do the same job to stop lift in the switch rails.

Sorry I don't have a good none copyright picture of any of these.

This is the stop bracket used by Vic Rail on this type of turnout. These were mounted on the switch rail. 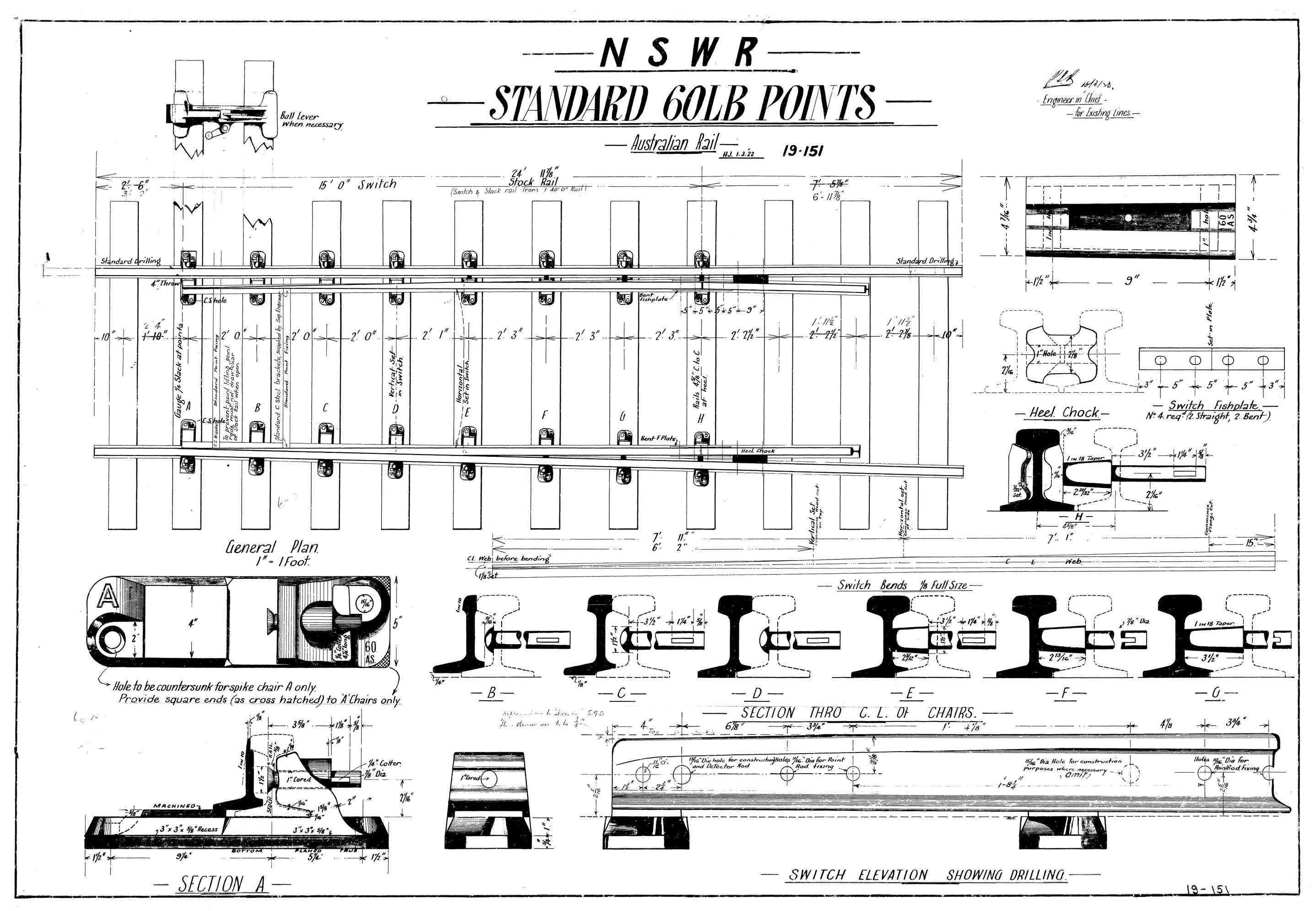 The heel of the switch is where it pivots from. The toe is the free end that moves inland out of contact with the stock rails.
Note this is a loose heel switch. The Heel chock sits behind the heel fishplate rather than being combined with it.
Note also the gauge stops and the heel stop that mount from the stock rail.

Cutting a flat into a sleeper fro hold either a flat bottom rail or a chair or plat is a common thing during certain
periods.

This would be from the 1860s. Double head rail chairs.

This is a adzing gauge with no incline for those times you need to let into a sleeper for a plate which may or may not have inclination.

The cutting requirements for the adzing machine. This is only required on running lines. Formations and yards are vertical. 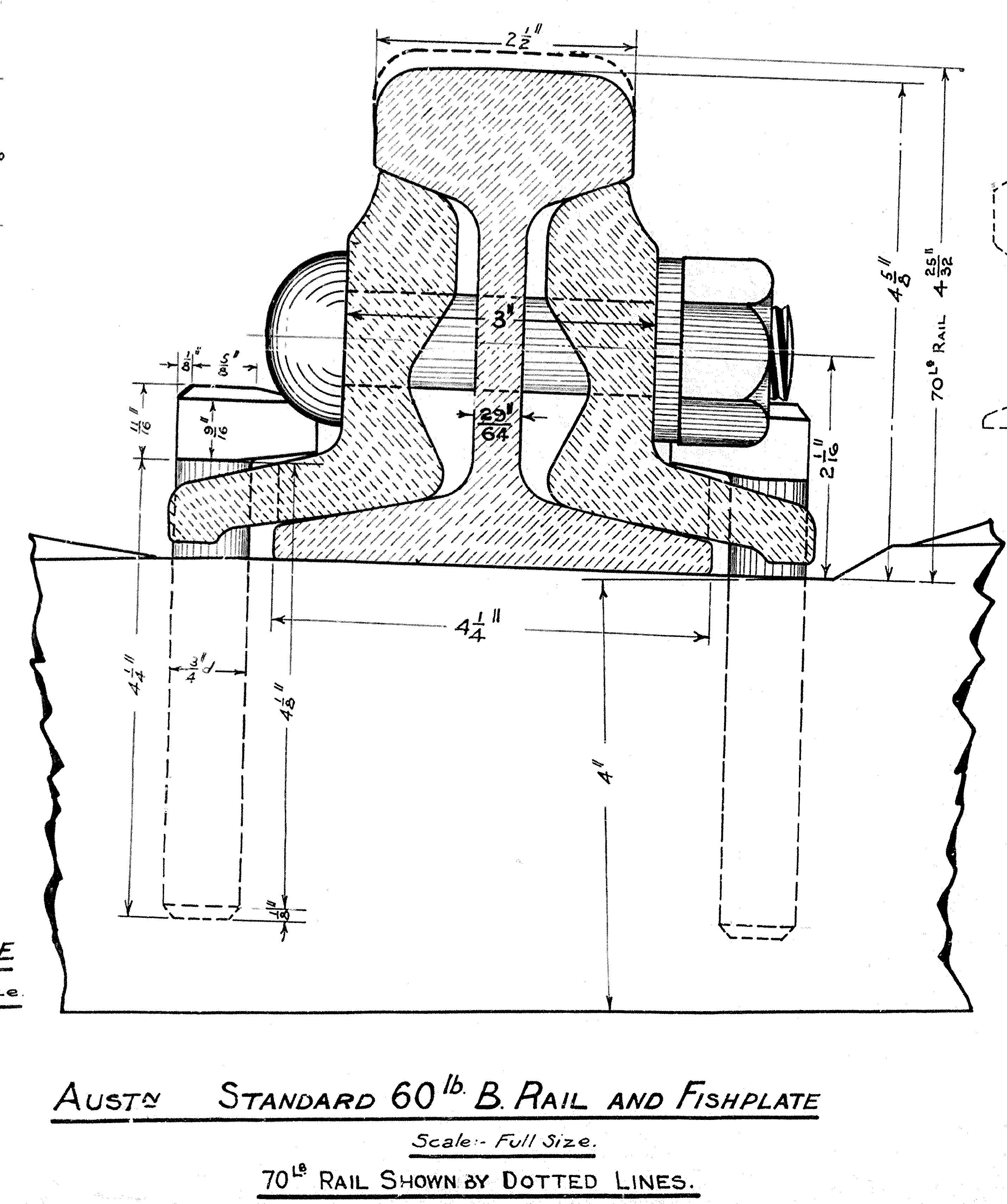 Matt,
Thank you very much for your replay, a lot of very good info.
This will keep me busy for the next couple of days

Where do you find such info?

The heel blocks and the spreaders are going to be implemented.
I think the heel block is a key missing element that i really need for several reasons.

I find this information during research into drawings for the NSWGR.
Been doing it for 12 years mostly concentrating on the Mechanical Branch
which is locomotives and rolling stock. But in preparation for an S7 layout
that didn't eventuate I became very interested in the prototype's development
of permanent way.

Ruined looking at model railways because nothing looks right anymore. The heel is still loose and is joined by a fishplate. Some of the later ones have a pivot pin under the switch rail as well.
Just like PECO. Heel-less switches are different animals, but I don't think your aluminium strip would enjoy that much flexing.

very satirising info, i can not get enough of it.
Heel block and joint---->gold, thank you again

Glad the information is useful.

Something went slightly wrong with your translating or perhaps "spell check" strikes again.
I wasn't trying for satire so I think you were after 'satisfying' as opposed to 'satirising'.

Matt M. said:
wasn't trying for satire so I think you were after 'satisfying' as opposed to 'satirising'.
Click to expand...

Yes i saw my mistake,it was the spell check. (i was very tired and there was a red line)
I did not mean satire but satisfying!
Very sorry for the goof up.
I refuse to use google translate.
Sorry for the inconvenience.
Your info is gold! to me.
Thanks

No apology needed. Nor was it inconvenient. Just wondered.
You are doing better with English than I would translating from and into Dutch.

Switch from around 1900 from the Netherlands

H
Just for a bit of fun, using an Iain Rice plan