Do I remember in the past asking you if we could have some extra custom settings slots for gauge/scale ? I did a search and couldn't seem to find it so maybe I didn't ask. If it isn't too much extra work can we have some more, please.

I haven't tried this but if somebody sent me a box file that they had created with a weird gauge and/or scale setting would it open on my installation of Templot and if so what would it display in the info panel relating to scale/gauge ?

Guinea_Pig_Tester said:
I haven't tried this but if somebody sent me a box file that they had created with a weird gauge and/or scale setting would it open on my installation of Templot and if so what would it display in the info panel relating to scale/gauge ?
Click to expand...

The way to save anything in Templot is to store a template containing it. I've written that a few times over the years.

Typically you would store a library template specifically for that purpose. It would likely contain other relevant settings, such as the timbering dimensions.

To make access to any library templates in the storage box a bit faster, in the next program update* I've implemented a library scroller which you can have anywhere on the trackpad while working: 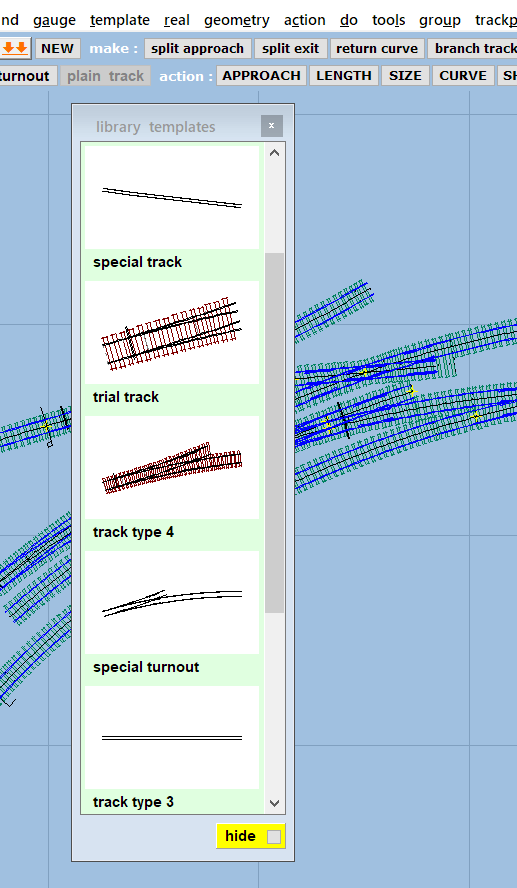 Any templates which have been stored as library templates will be shown in the scroller list, and clicking on one of them will copy it to the control template, and shift it to the centre of the screen.

Thanks to Igor for that idea.

*I'm beginning to despair of ever getting it released. There is still a lot of half-finished stuff in it, and I haven't looked at it for ages because at present I'm bogged down trying to get the old Templot Club content archived.

The purpose of the custom slots in the gauge list is completely different, and there only ever needed to be one of them. Its purpose is to allow a set of custom settings to be created, not saved.

For some reason lost in the mists of time I provided 4 such slots, and not very long ago I added a function to save their contents between sessions on the same computer. Someone asked for that (was it you?), but I have never made any use of it or seen much need for it. Settings which don't get included in a BOX file strictly belong in the program preferences because they are not available to anyone else who loads the file.

Hello Martin,
Thanks for the detailed explanation. No, I don't remember when or why the 4 custom slots appeared and I don't think it was me asking for them who prompted it.

I must admit to not having grasped the concept that gauge etc was stored within a template rather than being a more wide ranging setting although I do remember now you writing about the uses of library templates. As you can see I didn't take much action though

Thanks again, sorry to have slowed down your other tasks.

You haven't slowed me down -- I was going pretty slow anyway, distracted by watching events on CNN.

Looking at your screenshot has reminded me what I was thinking 20 years ago.

Originally the full list included several n.g. settings and just one custom slot. It soon became clear that n.g. is a minefield -- dozens of different gauges and scales, and almost impossible to get definitive data on the naming or flangeway standards. So I decided to remove all the n.g. stuff and leave it to users to define their own n.g. as custom settings. It seemed it might be useful to have two custom slots, one for a custom standard gauge and one for a corresponding narrow-gauge setting. In the event I doubled that to four slots, for no particular reason other than why not. That was before I implemented the obtain functions, which allow the control template to be minted from an existing template rather than simply being copied from it.

It could all do with a rethink -- but not just now, too much else on the go.

Yes, that makes sense. Pity I can't remember what I was thinking last week let alone 20 years ago

I chuckled at this story - https://edition.cnn.com/2021/01/08/uk/unlucky-burglars-pocket-dial-gbr-scli-intl/index.html

The CNN news channel can be watched free in the UK at:

Normally there are frequent musical interludes while they show advertising in the USA, but during the riot last week they ran continuously through the night without breaks.

No doubt it is also on subscription channels here, but the above feed is free. I watch it in Firefox on smart TV, leaving the computer free for proper work.

Thanks Martin,
I normally try and stick my head in the sand when it comes to news....the wife watches the BBC channels most of the day so at least we will know if Boris has resigned or Bristol rovers have won the FA Cup

H
Gibson v Romford/ Markit wheel back to back settings